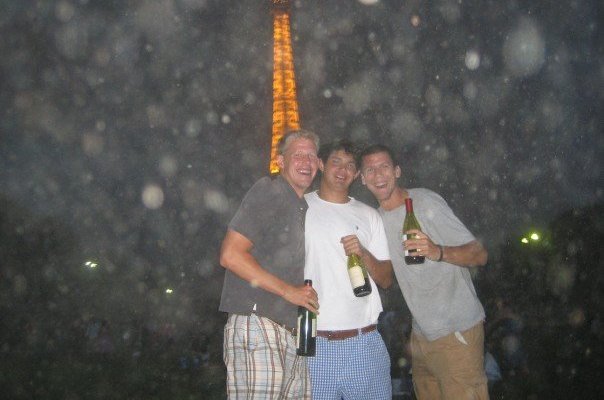 Departing from our regular format, this blog is going to take on the painful events of November 13, 2015 in Paris, France.

Nine years ago I went to Paris with my two best friends, Max and Paul.

It was August. At sunset, the temperate was sweltering. We were standing in the Champs de Mars underneath the Eiffel Tower when the heat broke. Relief came in a wall of clouds, howling winds, and a crash of thunder. This photo was taken in the middle of it all.

Fifteen minutes later, the storm cleared and it was night.

Ten minutes after that, we met a group of girls in hijab headscarves. They were from Les Banlieus on the outside of town and they spoke as much English as we did French. We shared the bottles of wine pictured with them and for a brief moment in time, made new friends.

An hour later, men began calling out for them in French and Arabic. The girls told us that these were their brothers and that we Americans were no longer safe. We took their advice and left.

Nine years have gone by and I still think of that day, now more than ever. Because we didn’t really leave. We hid in the bushes, drunk and curious to see who these men were that we were warned to avoid. And in truth, they were a lot like us: young, strong, and in their hearts, invincible. They differed in appearance: they had dark sin and didn’t buy their clothes at the Polo section of their department store. Instead, they wore white ankle-length robes, the ones we’d come to expect from terrorists and the clerics who trained them. It was unfair to say but modernity seemed to have impressed a certain fear on us, as if young men who looked like they did should be avoided like hairy-legged spiders and strangers with cargo vans.

Max yelled across the field to challenge them. They yelled back even louder.

Two seconds later, we ran away.

There is no clear answer now and if you expect that one day there will be, you are probably wrong. That’s okay though because If there is one lesson of history, it is this: civilization sputters along, muddling through today’s problems, learning about tomorrow’s, and letting the victor’s tell the tale of yesterday’s.

So stand tall. There is too much at stake to back down now. We must be proud and we must be brave at all times, in all places, no matter how insignificant.  In Paris or Beirut; in Jakarta or Geneva; in Baghdad or Berlin, we must be the victors. There is no other choice.

“The only thing necessary for the triumph of evil is for good men to do nothing.” – Sir Edmund Burke