Donald Trump’s presidency is a heaping mass of confusion. But several images from his Joint Address to Congress point towards new trends that are motivating politics and explain this strange moment we’re in.

The Three Amigos at the Top

Trump’s election was a political earthquake. For evidence of this, look no further than the three men standing on the rostrum and consider where they were at this time in 2013, after President Barack Obama’s re-election.

Speaker of the House Paul Ryan was coming off his first big break: being chosen as Mitt Romney’s running mate in 2012. Prior to that, Ryan’s political career had more in common with a beloved indie rock band than with a rock star playing for stadium crowds. Brand name Republicans like Mitt Romney, John Boehner, and Mitch McConnell had borrowed extensively from Ryan’s sound, but to the American public, Paul Ryan was an unknown wonky Congressman chairing an obscure committee. And it was to that role he returned after 15 minutes of fame with the failed Romney-Ryan campaign. Then, after some exceptional histrionics among House Republicans in 2015, Ryan emerged as their leader, where he remains today.

In 2013, Vice President Mike Pence was being sworn-in as Governor of Indiana after having vacated his Congressional seat and departed national politics. In Washington, Pence had proven himself a reliable GOP company man and had risen into the lower ranks of Leadership, but no one had mistaken him for someone with White House potential. In fact, it’s probably safe to say that Pence’s place on the Trump ticket in 2016 was driven by one thing above all else: no other legitimate Republican was willing to say yes.

In 2013, President Donald Trump was an armchair quarterback whose only political experience was leading the “Birther” movement to discredit President Obama’s American citizenship. Whether or not he was even a Republican at the time is an open question, with some reports saying he didn’t join the GOP until 2012. Little has changed about Trump since. He remains a political neophyte who has no donor base, little interest in his adopted party, and an antagonist relationship with its leaders. And yet today, he is the President.

The biography of the three leaders proves that we have been struck by a political earthquake. But if you’d listened to anyone tracking politics four years ago, they would have told you that this shake-up was next to impossible.

Who Clapped for What, and When?

Principles are a funny thing in politics. People value “compromise,” but they also lionize those who choose death before dishonor – those who will never sacrifice their bedrock beliefs. In the first camp, there are Bill Clinton and Ronald Reagan; in the second, Elizabeth Warren and Ted Cruz. But whatever distinction we make between principles and pragmatism was absolutely torched at President Trump’s first Congressional address.

There, Trump spent an hour laying out a Republican agenda that sounded distinctly un-conservative. He leaned heavily on civil rights imagery and articulated a plan for trade protection, extended paid family medical leave, a trillion dollar infrastructure bill, and an end to unilateral military campaigns.

As the President trashed Ronald Reagan’s vision of small government, global free trade and fiscally conservative capitalism, Republicans stood in thunderous applause. Meanwhile, the Democrats sat still, quite literally in an act of silent protest. And when it was over, they left their seats with the speed of European soccer hooligans rushing out before they missed the post-game brawl.

Trump has certainly given Democrats many reasons to dislike him, but it’s hard to remember a time in politics when a President gave such a glowing endorsement to the opposing party’s policies and received such complete disapproval. Conversely, never in memory has any party whistled so joyfully at its own funeral as Congressional Republicans did on Tuesday night. 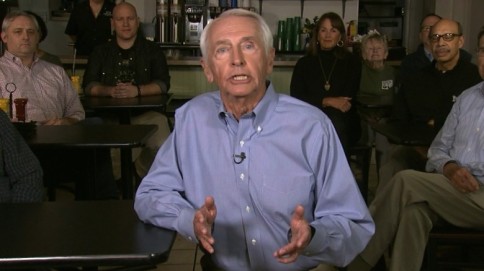 Television executives are known to overpay for big live events like the Super Bowl, the Oscars, and Monday Night Football. The reason they’re willing to do this is because this handful of events that draw tens of millions of eyeballs are proven launch pads for new entertainment. If you watched the Super Bowl, you know this. After all, how many ads did you see for the new 24 series beginning immediately after?

Savvy political operatives think of the State of the Union the same way. That’s why the out-of-power party takes great care to select who gives its response to the President’s address. It’s an opportunity to launch the career of a future presidential candidate. Look at who the Republicans picked in the last eight years: Bobby Jindal, Paul Ryan, Marco Rubio, and Nikki Haley, to name a few.

That’s why it’s so telling that former Kentucky Governor Steve Beshear got the Democratic mic on Tuesday night. As a man who will almost certainly never run for office again, Beshear seems like an odd choice. That is, until you consider the grueling electoral map Democrats are facing in 2018, where they must somehow hold on to 10 Senate seats in states Trump won, while re-taking some of the 36 governorships up for grabs – governorships that will control the once-a-decade process of redrawing Congressional district maps in 2020 – maps that broadly favor Republicans right now.

Liberals might have preferred to see Elizabeth Warren or Cory Booker rebut the President, but Beshear was a savvy selection for a party that badly needs to attract voters like him: folksy, white, and lacking an Ivy League degree. Going a step further, it’s proof that someone inside the Democratic Party has successfully made the case for tempering liberalism’s chaotic anti-Trump anger and instead targeting its message towards Trump voters that they’ve previously regarded as “deplorable.” Whether or not the party’s liberal base will allow this is the billion-dollar question going forward. 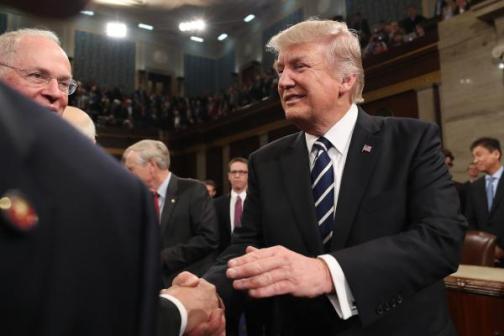 As for the President, his Administration remains an enigma, but his address to Congress gives some indication that a governing philosophy is emerging. It seems to pivot on dividing both parties against their ideologies and forcing odd bedfellows together on the path towards legislative victory. If the President can keep his mouth shut and his Twitter blank, he might just succeed.