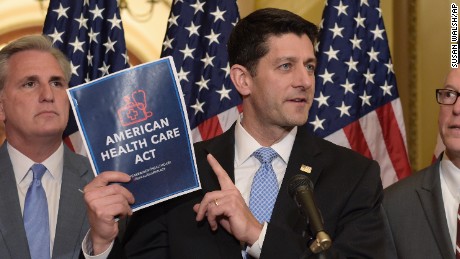 The following post was published by The American Conservative on August 3, 2016:

Albert Einstein famously said that insanity was “doing the same thing over and over again and expecting different results.” From that observation, one could conclude that Republicans who claim that “repeal and replace is not dead” are completely insane. But that reading misses an essential point of politics: In big-time showdowns like the one still unfolding around health care reform, ideas, morality, and common sense are all secondary concerns to the legislative process’ true imperative—winning.

That’s right, at the highest echelons of power the game is mostly about persuasion. And persuasion involves incentives—the levers that party leaders have to compel their members to take a hard vote for the team. The question becomes one of math, where the best idea isn’t the one that benefits the American people most but the one that gets to 51 votes in the Senate and 218 in the House. In the big leagues, new ideas aren’t required to keep legislative battles alive, but new incentives are: fatter carrots, bigger sticks, and hotter coals keep the debate moving. And unfortunately for Republicans, even as little green chutes of health care legislation sprout up through the ashes on the Senate floor, it just doesn’t look like the incentives are there to rally the party for a health care victory.

For some of the GOP, the incentive for health care action is a carrot: a chance to make good on a campaign promise to reverse Barack Obama’s legacy. For others, it’s the stick: a repeal-or-die mandate from conservative voters who are threatening to support challengers against the non-believers in next year’s political primaries.

But for most Republicans, health reform is a good faith effort to fix a program that any Democrat halfway through a six-pack will admit needs re-tooling. Unfortunately for GOP honchos Mitch McConnell, Donald Trump, and Paul Ryan, fixing something in need of fixing hasn’t been a strong enough incentive for rank-and-file Republicans to fall in line and take a hard vote. And that’s probably not going to change. Let’s face it: health care has never been a core issue for Republicans the way it has been for Democrats.

The rub comes in the D.C. double game, where our parties clash in two overlapping struggles, one being a contest for policy victory (ideas) and the other being a contest for political victory (power). When these two arenas overlap, things happen; and when they don’t, they get interesting, as they are now. What’s important to understand, however, is that politics usually trumps policy. Congress would barbecue puppies on the Capitol steps if the political incentives were right; but if the incentives are wrong, even a no-brainer bill will be shot dead on the Senate floor.

Which gets us to the strange calculus surrounding health care reform, where Republicans lost the policy war in 2010 but have won every political battle since. They’ve retaken all three branches of government and eradicated the Democratic Party at its roots. But as health reform falters in Congress, the burdens of power are on display throughout the Republican Party.

Leading up to the marathon of health care votes last month, President Trump himself voiced concerns that the House plan was “mean,” a refrain Senate Democratic Leader Chuck Schumer (D-NY) glibly repeated when he described its doomed Senate companion bill as “even meaner.” Moderate Republicans like Senator Susan Collins (R-ME) and Lisa Murkowski (R-AK) agreed and killed every single plan Majority Leader Mitch McConnell (R-KY) brought to the floor, including a do-nothing “Skinny Repeal” scrapped together for no reason other than to allow Republicans to save face while they scattered.

To the right of Trump, conservative superhero Senator Mike Lee (R-UT) announcedopposition to the Better Care Reconciliation Act, the last substantive plan Republicans brought to a vote, by declaring that it was fatally flawed for “not repealing all of the Obamacare taxes” and because it “doesn’t go far enough in lowering premiums for middle class families; nor does it create enough free space from the most costly Obamacare regulations.” Rand Paul (R-KY) put it more succinctly when he said, “The Senate Obamacare bill does not repeal Obamacare, it keeps it.”

Crazy as it sounds, Paul is right. Every time Republicans put pen to paper, what comes out is a rebalanced version of the status quo. This was the case for Paul Ryan and Mitch McConnell and it remains the case for new GOP bills being assembled by Lindsey Graham (R-SC) and the bipartisan duo of Lamar Alexander (R-TN) and Patty Murray (D-WA).

Suicide-vest conservatives will probably blame GOP leadership for the absence of a true “repeal and replace” bill, but the real parent of milquetoast legislation is reality. Voters are learning to like many of the Affordable Care Act’s provisions and are cantankerous about changes to their health care. As top Obama strategist David Axelrod said a few months ago,  “We are never going back to where we were eight years ago.”

The fact that Donald Trump, Mitch McConnell, Paul Ryan and, now, second-stringers like Lindsey Graham and Lamar Alexander are resigned to playing on Obama’s turf proves Axelrod’s point. So the question that has haunted the Republican effort from the start remains: why risk a career for any bill that props-up Obamacare? Why take all the blame for none of the glory? Why lose the political game and the policy game in one fateful vote?

But if the reality is that Republicans have been trying to pass a bill to entrench the Affordable Care Act this whole time, why haven’t the Democrats showed up to help? President Obama even acknowledged that his health care reform was “just a first step” and that it was “like building a starter home.” Democrats might not buy the GOP’s assertion that the house is sinking into the mud, but their calls for bipartisan efforts to reform amount to an acknowledgement that renovations are needed to preserve its structural integrity. So where are the Democrats?

The answer lies again in the disconnect between incentives. On paper, Democrats are at a historic low. But they’ve stopped Donald Trump’s agenda with a Russian canard that no one in the White House can kill, and they’ve stood on the sidelines while the Republican Congress exhausts itself with tribal infighting. Recently, Karl Rove warned that if Republicans can’t get their agenda in gear soon, “the GOP will watch as enthusiasm among party activists and donors wanes, prospective candidates decide not to run, and the prospect of holding Congress in the 2018 election dims.” Democratic strategists know this and aren’t in hurry to throw Republicans a lifeline.

Indeed, doing nothing has been a spectacularly effective strategy. By allowing Republicans to self-immolate rather than legislate, Democrats have seized the initiative on health care for the foreseeable future. Senator John McCain telegraphed this new reality after dealing the fatal blow to his party’s last effort,saying, “Let the Health, Education, Labor, and Pensions Committee under Chairman Alexander and ranking member Murray hold hearings, try to report a bill out of committee with contributions from both sides.” This process is now in the works. But panhandling to Democrats for support will likely require a fundamental change in direction. It will force Republicans to debate what to expand in order to “stabilize” the Affordable Care Act, rather than what to cut in order to “repeal” it. This bargaining position will only get worse as Democrats claw back Congressional seats, ruling majorities, and possibly the White House in the coming years.

Republican legislators have voted with their feet. In other times, they might have heeded Ben Franklin’s famous advice for heady times to “hang together” or else risk being hung separately. But with an angry Tea Party camped to the right and a blood thirsty resistance waiting on the left, Republicans seem to think they’re safer playing every man for himself. Yes, this was probably their last best chance to leave a mark on health care but short-term thinking often carries the day in Congress. The reason is simple, older than democracy itself: In the game of power, facts, ideas, and morality come second. The prime motivator is survival.